Does every city need a Guggenheim Museum? 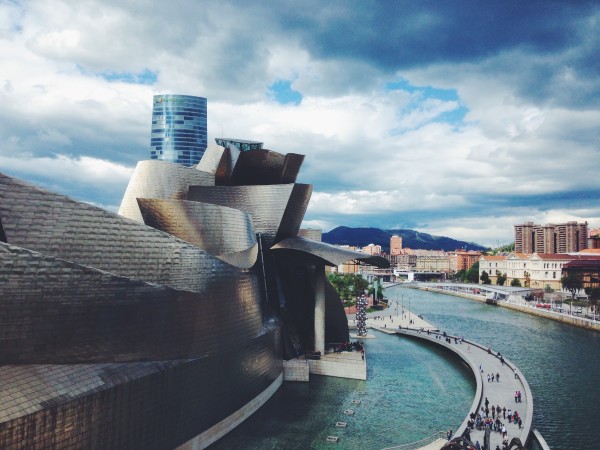 Twenty years ago, the Guggenheim museum was established in Bilbao (Spain), what resulted into the so-called Bilbao effect. The city’s economy changed drastically leaving positive footprints. With the help of local students’ opinions, this article will try to analyse Bilbao’s change and tries to answer the question whether every city would benefit from a Guggenheim museum.

The Guggenheim Museum focusses on collecting, preserving and interpreting modern and contemporary art across various locations like New York, Venice, Bilbao, and Abu Dhabi, while forging international collaborations that explore ideas across cultures through dynamic curatorial and educational initiatives. With unique, eye-stunning buildings, that are already art itself, the museum really puts itself on the map. While Guggenheim NYC is in the top 5 of best visited museums in New York, Bilbao’s Guggenheim is the reason why tourists visit the city. But how did that come about?

During 19th and 20thcentury, Bilbao’s economy proposed, what caused the city to be the economic centre in the Basque Country. Throughout this time, the first railway was build, the Bank of Bilbao was founded and many industries grew vigorously. Large-scaled iron ores were discovered in the region and the waterway from Bilbao to the bay was covered by steel and shipbuilding industries. Around 1900, Bilbao’s port was the biggest in Spain, what allowed fast development of the region’s economy, shipyards, and steel mills. However, in 1936, Bilbao suffered from several bombings because of the Spanish Civil War, destroying the bridges over the waterway.

Around the 1980's, Bilbao experienced a destructive industrial crisis caused by multiple factors such as terrorism and external cheap labour

After the war, Bilbao returned to grow and rebuild the city and bridges, while the airport started to operate its first commercial flights. The iron industry blossomed once again and the industrialised city was growing. However, around the 1980’s, Bilbao experienced a destructive industrial crisis caused by multiple factors such as terrorism and external cheap labour. The population decreased by almost 10% in 20 years and the city’s economy declined bigtime.

While the welfare was decreasing, the idea of building the Guggenheim Museum came up. At that time, Bilbao was the victim of terrorist attacks of the ETA and an increasingly number of closedfactories, causing a lot of unemployed. The plan created a lot of resistance against the museum, because why invest money into some museum instead of investing it in something else, such as schools? Aside from that, the city was already investing in its urban development by constructing a new metro system, designed by Norman Foster, and rethinking its public spaces. Bilbao was already undergoing a change and the Guggenheim museum would be the grand finale of the city’s restructuring: a massive building that would not go unnoticed. Besides that, the museum was just a part of a bigger project. The river and the area around it would be cleaned up, causing the whole area to transform from an industrialised site into a place that could reach its fullest potential to blossom.

After the opening of the Guggenheim, almost all the locals saw the advantages of the museum. According to Forbes, the museum had an economic impact of €168 million on the local economy within the first five years. Since its opening, the museum attracted around 19 million visitors, 70% of those from abroad. Because of the many visitors, the low-paid, unskilled jobs in the service industry grew enormously. Even though the service industry grew, influencing the economy in a positive way, the other industries like shipbuilding are still extant.

Nowadays, locals are generally positive about the Guggenheim Museum. It brought them great welfare and the city changed from a smoky, industrialised city into a green, and cultural one. Nobody wanted to visit Bilbao over 20 years ago because it was considered a grey and ugly city. Even though Bilbao has changed drastically over these years, a lot of people apparently still view the city like this, causing them to avoid visiting it. When you walk in the city, you can still see the elements of the industrialised phase but now added with a new cultural element.

Guggenheim in other cities?

The Bilbao-effect worked out great for Bilbao, but for other cities it would be hard to duplicate this process. While Guggenheim was looking for expansion on cheap lands, Bilbao was looking for a new reason to exist. Guggenheim and Bilbao found each other in the right place at the right time. Furthermore, the whole process of restructuring the city, that took place before the construction of the museum, was the first major step into the right direction. All the events together just occurred to be a magic recipe for both Guggenheim and Bilbao.

A special thanks to Asier Rodríguez (AEGEE-Bilbao)