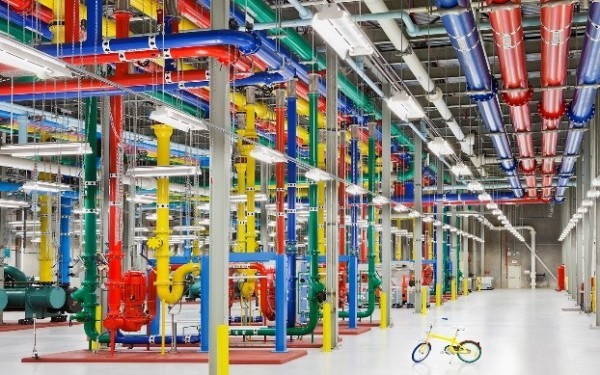 Last year, on the 6th of December, Google opened a new datacenter at the Eemshaven in Groningen, which is expected to be fully active by the end of 2017.

Google built their first datacenter at Eemshaven in 2006, and after experiencing an effective collaboration with the province of Groningen, Google decided upon building a larger center, starting in 2014. After two years of building, the center, spanning a surface of nearly 40 soccer fields, was finished, costing 600 million euros. According to the size, it is speculated that the datacenter contains tens of thousands of servers.

This datacenter is the fourth of Google in Europe, hosting its cloud computing services, files storages and all search requests which have been processed. Examples of these cloud services are Gmail, Google+, Google Maps and YouTube.

The datacenter in Eemshaven provides Google with valuable local insights, enabling it to appertain to the community. The combination of scholarships and local initiatives, with Google’s tools and expertise, facilitates the creation of sustainable and knowledge-based economic improvements for local companies, educational institutions, and non-profit organisations.

Google stated that “[a]t the datacenter, we launch an official program for scholarships, with which we support organisations and initiatives at the Eemshaven. Three aspects are important: education in science and technology, reducing CO2 emissions, and internet access.”

First of all, Eemshaven was chosen in order to improve the speed of data and internet traffic between Europe and the US, accelerated by a vast internet cable. Accordingly, the recent development of the autonomous car which has to be continuously connected to the internet will make use of this improvement, giving Google a competitive edge. Moreover, the flood risk for Groningen lays with 14.2 meters in comparison to Amsterdam with only 2 meter, seven times lower and speaks for the Eemshaven.

Did you know that Google and Groningen wrote history when the company settled its first datacenter in a suburb of the city?! The bi-sided satisfaction of this deal added to the decision on placing the datacenter in 2014 in Eemshaven.

However, in 2003 Yahoo decided against locating on of their datacenters in Groningen, which would have restricted Googles todays actions. Further, the establishment of the datacenter nevertheless will not affect the internet connection of citizens from that area positively since the advanced technology is limited towards the company’s facilities.

Minister Henk Kamp of Economic Affairs said that “[t]he arrival of Google at Eemshaven is ‘great’ and ‘an important support of our digital infrastructure’, this offers great opportunities for our province”. He supports the assumption that employment opportunities will rise with approximately 600 new jobs, varying from computer technicians to construction workers, and from catering employees to security guards. Moreover, the datacenter will indirectly create roughly 400 additional jobs in a variety of sectors. The construction of the datacenter alone created around 1,500 jobs, of which half went to Dutch employees. Furthermore, the datacenter may attract competitors and may lead to agglomeration in the long-run, which additionally increases employment.

Google only hires personnel with the highest qualification and expertise from all over the world, however, they prefer local employees. This is not only good for the company but also for the community, as Google can support the well-being of the community in which it is operating. Furthermore, Google tries to work with local suppliers, given that they possess the right resources.

Minister Henk Kamp of Economic Affairs further empowers Google to get involved with regional initiatives like programming courses and other projects for students in cooperation with the Hanzehogeschool. Google hereby, would offer students and entrepreneurs the opportunity to improve their digital skills and build a digital workplace, which maybe generates their own future employees.

All in all, the building of the datacenter at Eemshaven boosts the economy with creating new job opportunities and a healthy infrastructure, which increases the investment potential for datacenters in Groningen in the long-run.